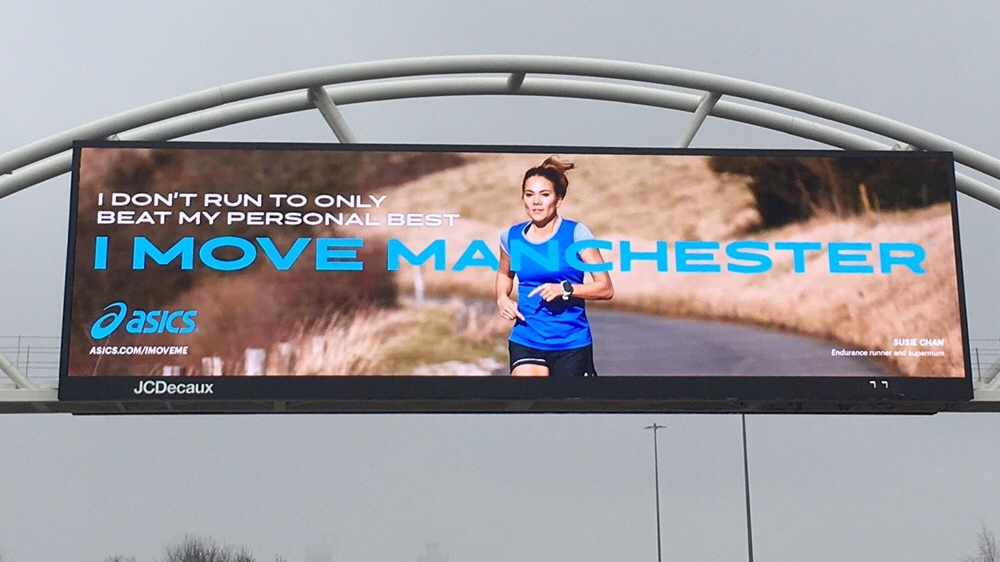 So, it’s done. All those months of training and previous blog posts and the Manchester Marathon 2018 is finally over! So how was it?
First up, it was mission accomplished for me. I got my PB!!! (For people that are interested in times I ran 4:25:41 and my previous PB was 4:29:59). That was what I set out to do so I’m super happy! 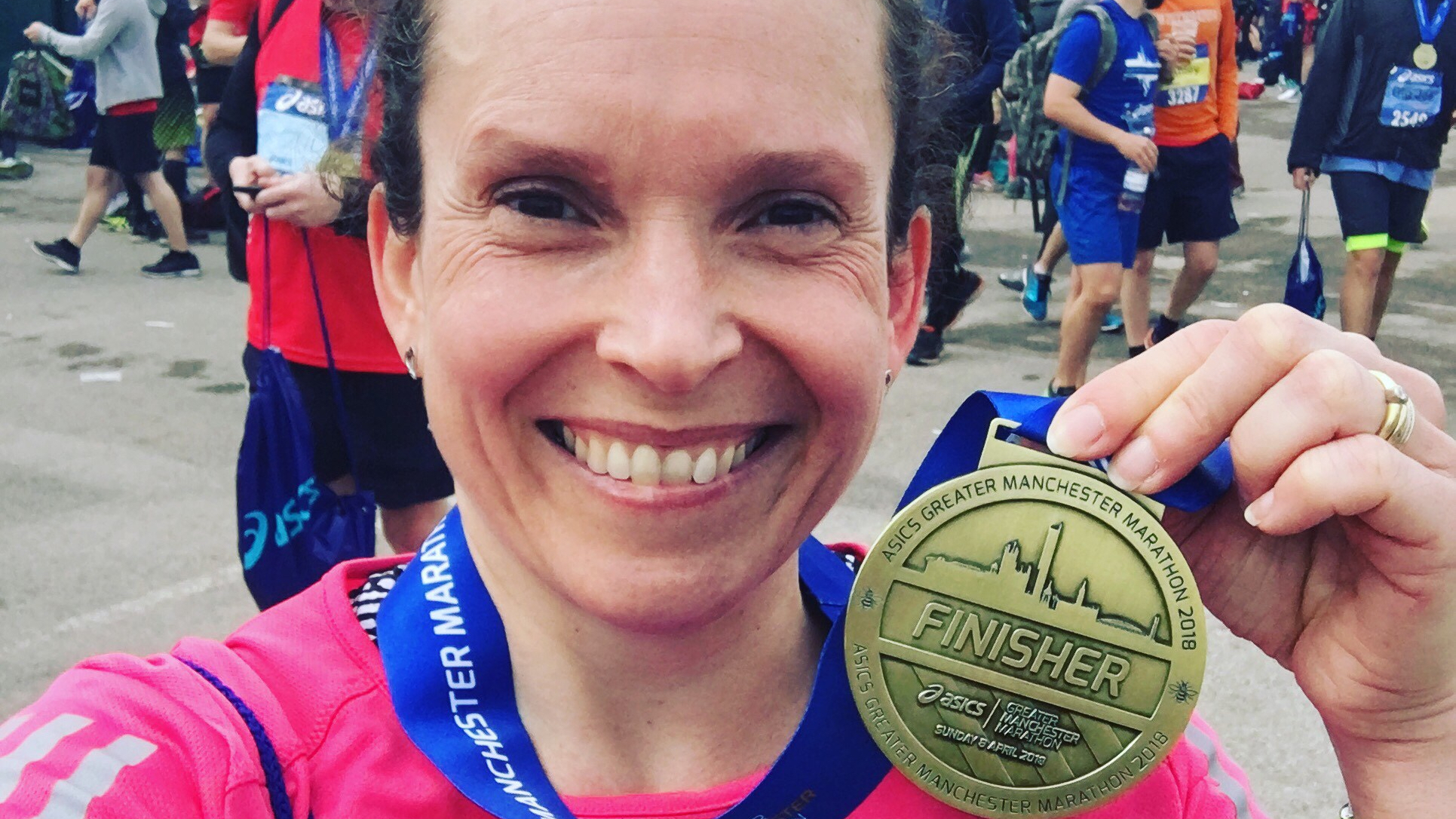 I’ve never been so public before about my goal or my training. I always recommend people make themselves accountable to others, to spur them on and help them stay motivated to reach their goals. I thought I should try it myself! It certainly added another layer of pressure but it helped so much. I was overwhelmed with good luck messages before the race. Knowing that so many people were wishing me well (and tracking me while I ran!) really encouraged me. Thank you so much!
I got a lovely boost of inspiration at the start line when I saw Susie Chan’s face looking down at me from the advertising board. I knew she was running in the Marathon des Sables and would be suffering much more than I was about to! I felt very strong up to 20 miles but then I let the running gremlins win and slowed right down.  Looking back now I can see that it was purely a mental thing, physically I was in great shape – even my dodgy ITB was behaving. Just goes to prove the point that so much of running a marathon is about what goes on in your head. Turning that into a positive however, it’s given me a hunger for another bash at it!
The race itself was brilliant. Having run in London and Boston I wasn’t sure if Manchester could rise to their dizzy heights but it certainly did. There seemed to be a competition between the different areas of the city to give runners the best experience. There was live music everywhere, fancy dress, entire choirs, car horns and more children handing out sweets than I’ve ever seen at a marathon before. Such amazing crowd support. There was also an angel who popped up twice on the route. An adonis-like male in skin tight white jeans and T-shirt and a pair of wings. If I hadn’t actually felt like I was in hell at that point I might have assumed it was heaven! There were genuine Race Angels near the end of the race spotting struggling runners and offering to run with them for a while. I was having ‘a moment’ and one offered her services but I knew I would be ok and had no doubt that I would finish at that point so I declined knowing someone needed her more.
The camaraderie between runners was great with everyone willing each other along and three runners stopping to help a lady who had slipped over ahead of me.
I can’t fault the race organisation. Everything was very easy and smooth. Top marks. Many thanks to all those who gave up their Sunday to make it possible. I for one am very, very grateful.
My husband and kids were waiting at mile 26 which was such a welcome sight. I put on a sprint finish for them. At least I thought I did but when I look at the finish line videos I appear to be running very slowly. Ha ha!

The post-race beer was very refreshing. So was the chilled glass of white wine that I had to wash down a hard-earned roast chicken dinner later that night.
The day after and I’m in pretty good shape. Not a single blister. I’m a bit stiff and sore on stairs but otherwise ok. I’ll be gentle walking for a few days but hope to be up to a bit of running in time for our 261 Fearless Club Lune Valley session at the end of the week.
I’ve got my, “What’s next?” head on. I know I need to make a plan to stop the post marathon blues. I quite fancy a half marathon, I’ve only done a handful and think it’s a nice distance, it was certainly the point I wanted to stop at yesterday! A friend has found one for me in May and kindly pointed out that there is the full marathon option too and that six weeks would be long enough to recover from this one. We’ll see …
Now to focus my efforts in supporting those who still have their challenges to come. I’ll be cheering on the 261 Fearless Boston Marathon team from my armchair but I’ll be heading to the London Marathon to cheer on Kathrine Switzer and a few other running friends too. Then it’s down to Devon to support the women doing the Women Can Marathon and Relay.
I hope your training is going well, whatever you are aiming for keep working hard, it feels SO GOOD when you achieve it. Thank you everyone, you helped me so much! 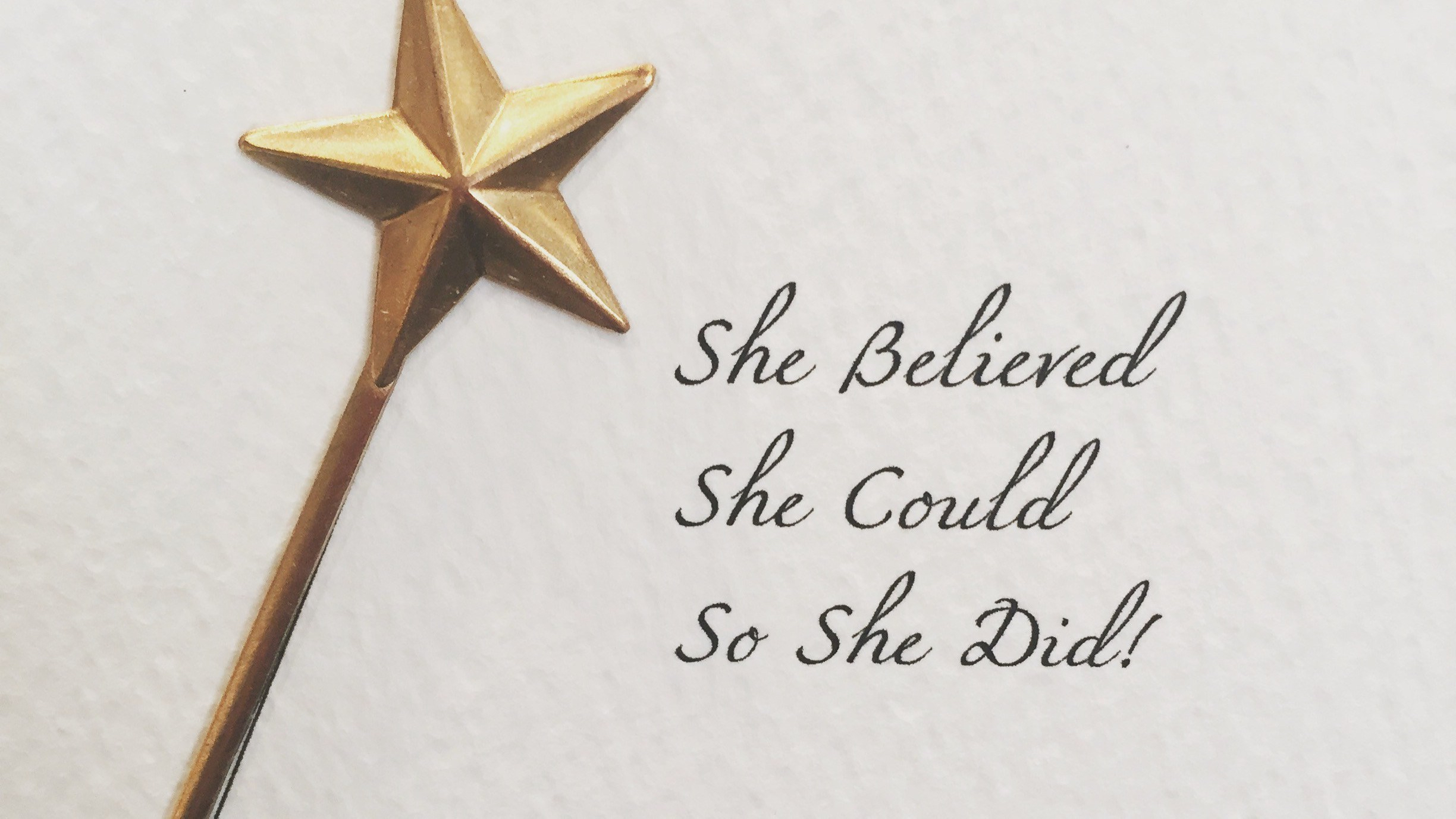