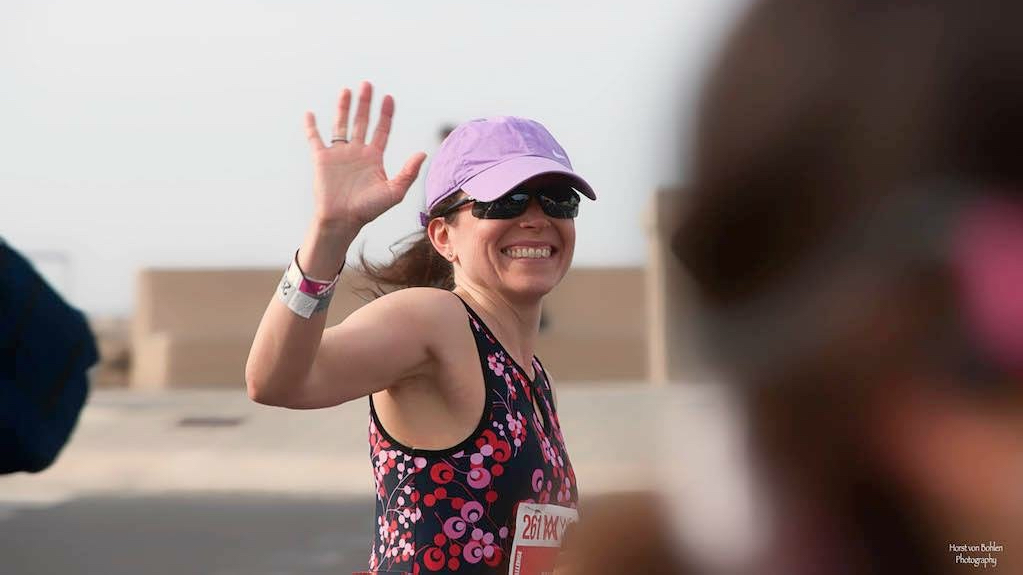 I’d been training in freezing temperatures and cold winds when I was suddenly plunged into the heat of the Virgin London Marathon in 2013. As a relatively new runner and taking on my first marathon, I was anxious about running the distance anyway and this quadrupled when I realised how warm it was going to be. How much should I drink? What speed should I go? Would I even make it round now? So many extra things to think and worry about. I survived without incident and I’ve since run marathons in soaring temps in Mallorca and Boston and along the way I’ve picked up lots of tips for running in the heat.

Adjust Your Plan. If you aren’t used to running in the heat, then the first thing to know is that you won’t be able to run as fast as you do in the cold. Your body will be putting some of its efforts into trying to keep you cool rather than into optimising your performance. It’s much better to adopt a ‘slow and steady, see how you go’ approach. Pushing for a PB in conditions you aren’t used to is a risky business. Perhaps set yourself a new target such as having the most fun in a race ever, the most crowd interaction or the most conversations with other runners – this will make for just as memorable a marathon.
Wear the right clothes. Go for lightweight, breathable fabrics. Shorts and vest top or T shirt if you know that you prefer to keep your shoulders covered in the sun. You might not have trained in these and we’ve all heard the phrase ‘don’t wear anything new on race day’ so dig out the old favourites from last summer. If you’re prone to thigh chafing with shorts then go for slightly longer ones and slap on vaseline on your inner thighs and where the hem meets your skin.  Vaseline around bra and shoulder straps is a good idea too.
Don’t drink too much. Yes, everyone will be telling you to keep well hydrated but it’s important to know that drinking too much and being over hydrated poses as much risk as dehydration. Hyponatraemia is a condition where blood sodium levels become too low and in an endurance situation is caused by over consumption of water. It can make you feel dizzy, sick, weak and in the extreme, suffer seizures and unconsciousness.  Don’t force yourself to drink. You don’t need to take water every time it’s offered. Use a sports drink  for some of your hydration to replace lost electrolytes. Don’t over think it. Just drink if you feel thirsty.
Cool down. On a hot day there are sure to be water sprays on the route, these might be showers to run through, people with hoses and in the case of Boston 2017 an open fire hydrant that I got a bit too close to and was almost knocked off my feet by the force of the water! Wet sponges might be on offer, squeeze them on our head and down the back of your neck; let the cool water trickle inside your T shirt. If ice is offered then take off your hat, grab a handful, put it in your hat and then put it back on. You’ll have a cool head for a couple of miles as the ice slowly melts. Be mindful of taking water bottles to purely pour over your head as there may be other thirsty runners behind who might need it.
Protect yourself from the sun. Whether it’s cloudy or not when you start, put on some sunscreen. When the sun is blazing 13 miles in you will be glad you did. A sweat resistant one is a good idea so it doesn’t run off. Don’t put too much on your forehead as when the sweat and suncream combo runs into your eyes they will sting like mad. (I’ve been there!) Instead, wear a cap with a brim or a visor if you prefer to have the top of your head uncovered. This will greatly reduce the amount of sun on your face and help to keep you cool too. Sun glasses will protect your eyes from the UV rays, tricky if you aren’t used to running in them but most people find they’re not an issue especially if they’re a lightweight sports brand.
Don’t panic. You can waste a lot of energy worrying about the heat. Stay calm. Do what you can to prepare for it and relax. Think about an ice cold drink at the finish line to get you through. Take it easy and have a wonderful sunny run.
Photo credit: Horst Von Bohlen