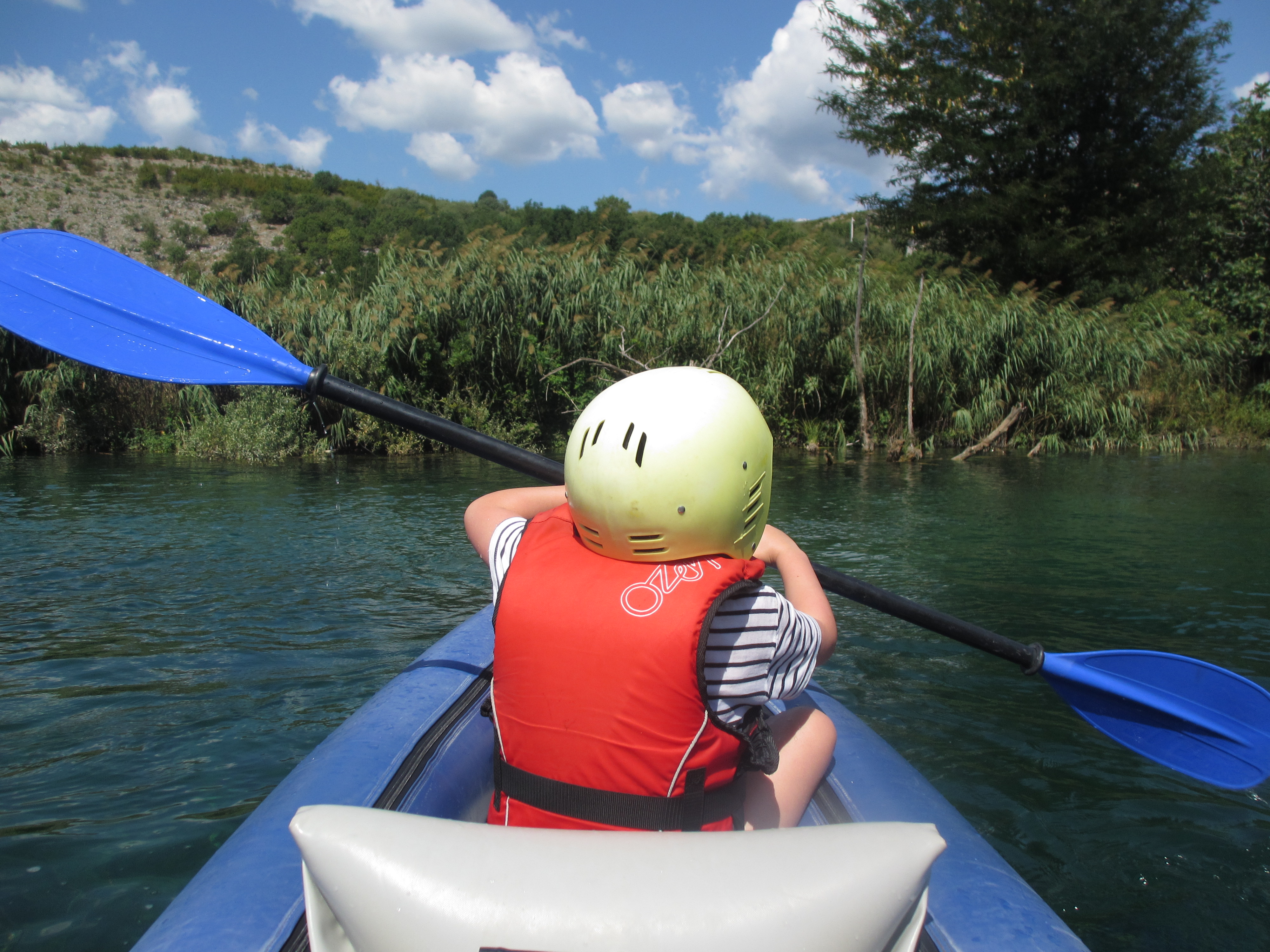 How adventurous are you when it comes to family activities?
On our recent holiday to Croatia we signed up for a day trip kayaking through a gorge. At the start, all kitted out in life jackets and helmets we gathered to get the brief from the skipper. He told us with glee about the waterfalls we’d kayak over and how one in particular was really BIG. I started to wonder whether the whole idea was crazy, especially with three kids and seriously considered just retreating to the safety of our lovely swimming pool.
These were double kayaks so my husband and I planned to take a son each and my daughter who’s the youngest was to go with the skipper. This seemed the safest option. Suddenly the responsibility of a seven year old who’d never paddled before was something I didn’t relish!
I’ve done a bit of kayaking before when I lived in New Zealand and in Shetland but I’m not a particularly strong swimmer and watersports always make me slightly nervous; especially when children are involved. My three had their own anxieties and the last thing they needed was negative vibes from me. So, declaring, “It’ll be fine. You’ll love it” I strode off purposefully towards the boat. It’s amazing how good an act you can put on when you’re trying to protect your children. 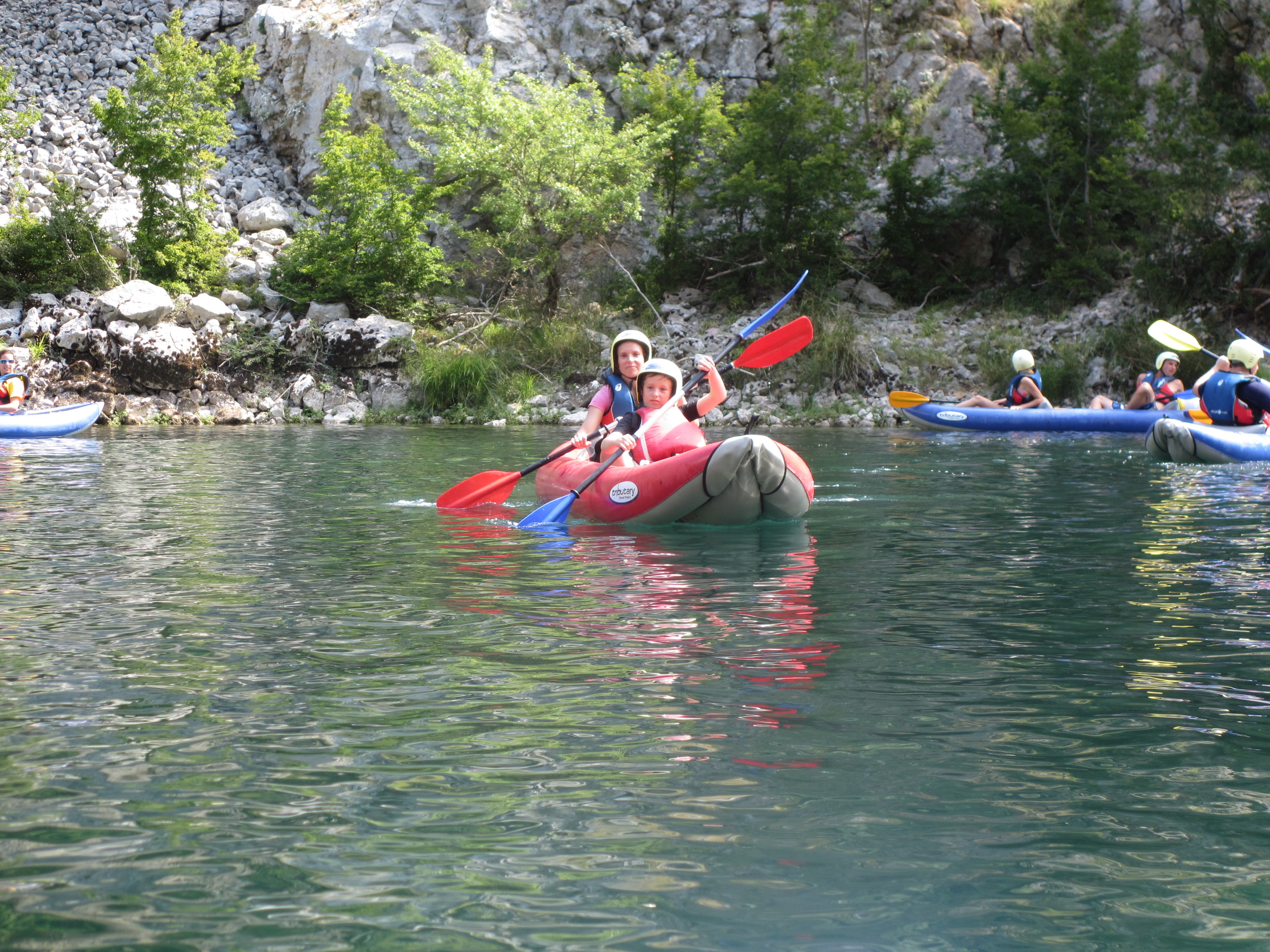 The water was crystal clear and the scenery was stunning. The river was slow to start with and we’d got our confidence up by the time we reached any sort of rapid. When we shot over the first mini waterfall I realised it would take an awful lot to dislodge us from the boat and I began to relax.
My 11 year old son seemed to have a natural ability to know how to paddle the kayak. We became a real team, shouting instructions at each other and working together to propel the boat in a forward direction (most of the time). When we accidentally headed into low hanging branches and rocks we managed to find ways to manoeuvre ourselves out of difficulty. When our arms were tired we took it in turns to have mini breaks to  rest our burning muscles. 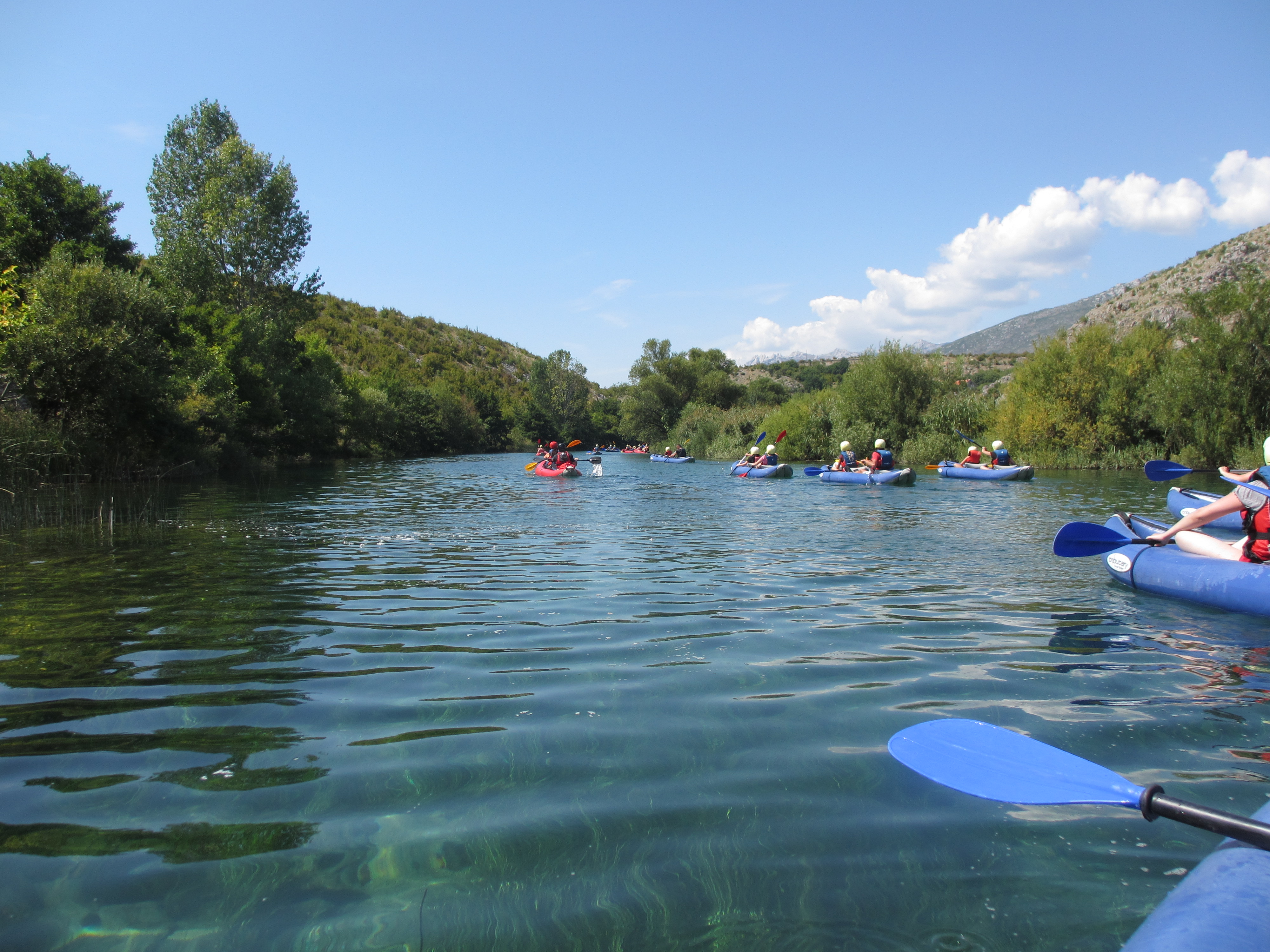 I loved it, memories of my previous trips came flooding back. I told my son the stories of me and his Dad kayaking with a tent and a few food supplies in the hold and camping on beaches in New Zealand. Trips around the rugged coast of Shetland with seals jumping around the kayak. Days when risk taking and adventure was so much more a part of our lives.
Then came the big waterfall. Only one person was allowed to stay in the kayak for this while the other had to get out and scramble around on the rocky path at the side. My son decided I should ride the fall. Then he changed his mind, he wanted to do it. I felt a mixture of pride in his decision, fear for his safety, sadness I wouldn’t get the chance to do it and relief that I wouldn’t have to……..mostly relief


So, bless him, at age 11 he paddled solo over what looked like the edge of the world. I watched from the other side and saw my precious son hurtling over a waterfall with nothing but a blow up boat and a helmet to protect him. He stayed in (just) and skilfully regained control of the boat and paddled over to pick me up. He was beaming, it was ‘awesome’ apparently and he wanted to do it again. We were rewarded with a swim in the cool water and I had time to reflect on the possibly reckless parenting moment that had just passed. 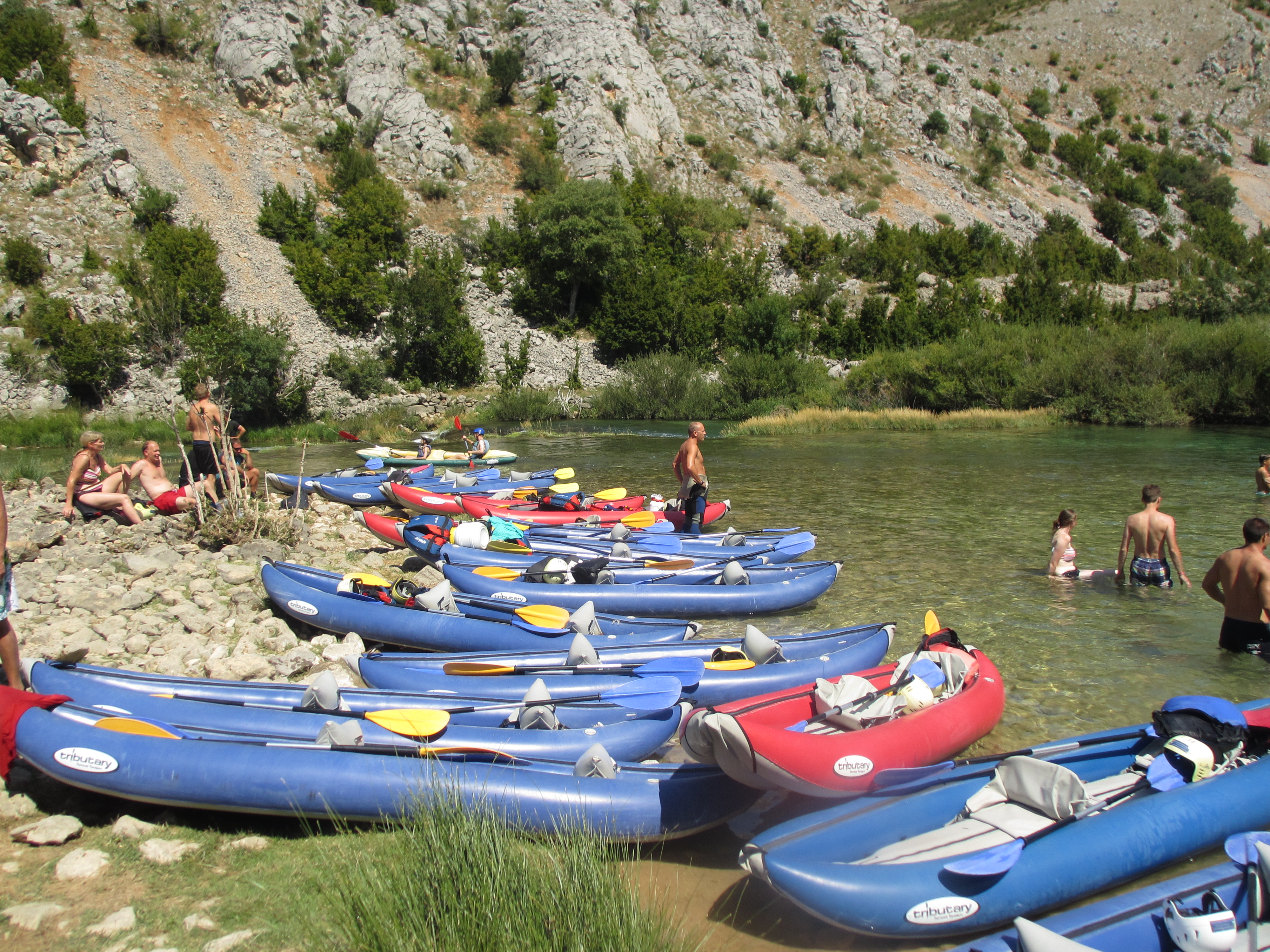 A couple more hours of paddling and we were at our destination. We stretched out in the sun re-united with the rest of the family who’d had an equally fantastic time.
I’m so proud of him. I’m so proud of us. Working as a team with your child is the best feeling in the world. Solving problems, developing skills, taking risks together. We had one of our best family days ever. Being brave and trying something new is so rewarding. Importantly for me we shared exercise and time in the great outdoors. It was fun, memorable, demanding and ended with him asking, “When can we do that again?” Soon I hope but next time………. the waterfall is MINE!
What adventurous activities have you tried with your children? I’d love to hear about them. Leave me a comment below. 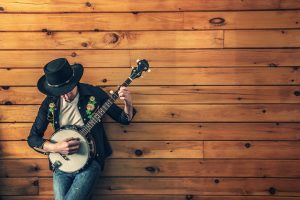 Forgive me for sounding just a little negative amongst all the excitement but I just want to bring up a rarely spoken about topic. Something that might be unexpected and… 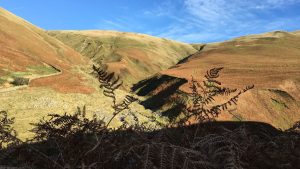 Have you heard of the Howgills? The Howgill Fells are those amazing hills that are on your right as you drive north up the M6 when you’re past Kendal. Everyone… 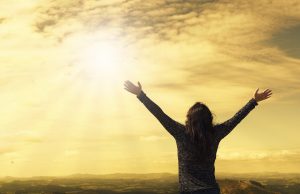 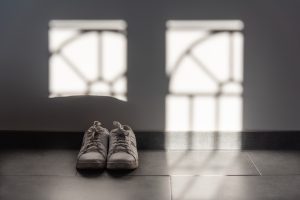 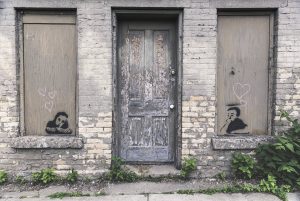 I’ve never been more grateful to love running than right now. Since I began running 12 years ago, it’s always been there for me, through thick and thin, happy and… 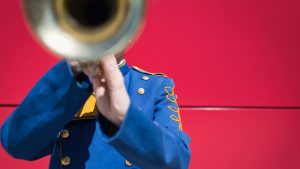 I’ve been pondering the fine balance between being inspiring and being intimidating recently. The thing is, I think as we improve and smash our targets, as we progress in our…